How to Remove Snow from Your Satellite Dish

Once winter arrives, it is important to remove snow from your satellite dish to avoid damage, prevent hazardous conditions and to continue to get a good signal to watch TV.

Here’s everything you need to know to make sure your satellite dish makes it through the winter, including the best methods for cleaning it.

Why You Should Remove Snow from Your Satellite Dish

Removing snow from your satellite dish is essential because if snow is allowed to accumulate, you may lose television or internet signal.

If you are expecting a large amount of snowfall, you will need to clear your satellite regularly. If a substantial amount of snow builds up, it could fall off your roof, damage your property and hurt someone in the process. While most satellites are sturdy and attached correctly, it is always worth being cautious during a blizzard.

Many of these methods can also be used to remove snow from your roof, too.

How to Safely Remove Snow from Your Satellite Dish

In most cases, you’ll want to carefully climb a ladder to access the dish and remove the snow using a soft bristle broom.

Most people place their satellites on the roof, which can be hazardous to access, especially in icy conditions. We definitely do not recommend climbing on your roof or a ladder when there is ice or snow. However, there are several precautions you should take if you have to use a ladder to reach your dish.

First, you will want to make sure there is no ice on the ground below, as this may cause the ladder to slide out from underneath you unexpectedly. Placing some grit on the ground before you place the ladder down is a good idea, as it will give you extra traction. You will also want to scrape any ice off of your shoes, as this could also be dangerous. During winter, try to store your ladder inside to avoid ice forming on the steps. To be extra safe, get a friend or family member to hold the ladder, so it does not fall over.

Do not use anything like an ice scraper or a shovel to displace stuck-on snow, as this may scrape your satellite dish and move it out of position, ruining your TV signal.

The best thing to use to remove snow and ice from your satellite is a long-handle broom with soft plastic bristles or a snow rake with a long handle. These tools will ensure you don’t have to stretch to reach your dish and are less likely to displace your satellite.

If you’re clearing large amounts of snow from your satellite, make sure you’re not standing directly underneath the satellite and move any expensive equipment out of the way. Snow falling from high up could hurt someone and damage your property.

There are several ways you can stop snow from building up on your satellite in the future. One of the best methods you can use is a satellite heater.

Satellite heaters have a built-in thermostat that turns on when the temperature is low enough for ice and snow to settle on the dish. The heaters lightly heat your dish, leaving it free from snow and ice.

If you cannot afford to buy a satellite heater, try using a satellite cover. These covers are made from nylon, so ice and snow can’t stick as easily. Satellite covers are also easy to put on, and can be applied during nice weather as a preventative maintenance. This will save you from climbing up a ladder in the middle of a snowstorm. However, covers are less effective than heaters, and some snow may still settle.

How To Remove Snow From Your Roof - Quickly, Safely & Easily
← Read Last Post 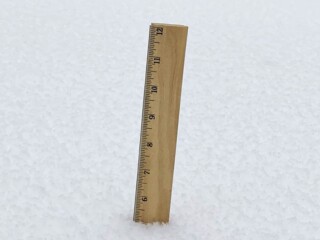